What is the ablation procedure for modulating the atrio-ventricular node?

The catheter-based radiofrequency ablation procedure of the atrio-ventricular node is aimed at patients suffering from persistent atrial fibrillation, in which drug therapies for rhythm and heart rate control are not effective. This procedure is always preceded by the installation of an electrostimulation device, generally with resynchronization function (CRT-D; CRT-P). This approach to treating atrial fibrillation is known as “ablate-and-pace”.

How is the ablation procedure performed for the atrio-ventricular node modulation?

After local anesthesia in the femoral site, the Seldinger technique is followed by cannulation of the right femoral vein. Through this venous access, a scaler catheter is advanced near the atrium ventricular node (compact part). By delivering radiofrequency, electrical communication between the atria and ventricles is interrupted, thus allowing the implanted device to stimulate the heart at the desired frequency. 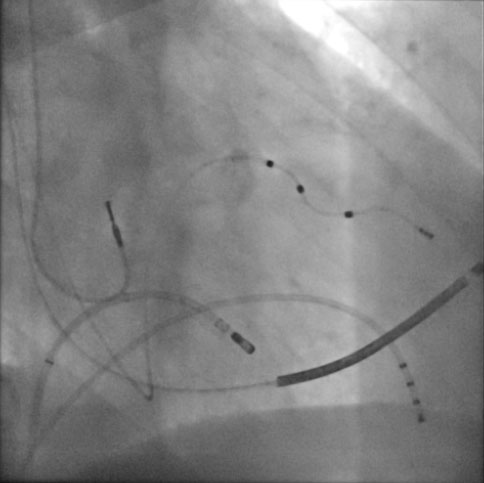 After modulation of the atrioventricular node in general, an intrinsic escapement rhythm at the junctional level can remain, the frequency of which is generally between 30 and 50 bpm.

What are the effects of the ablation procedure for modulating the atrio-ventricular node?

The “ablate-and-pace” approach is the approach of choice in patients with atrial fibrillation, in which a high ventricular response reduces the effectiveness of cardiac resynchronization. Therefore, this procedure is an important therapeutic measure, especially in patients in whom atrial fibrillation appears to be associated with heart failure, and is very effective in controlling relapses and symptoms of heart failure.