The subcutaneous implantable cardiac defibrillator (S-ICD) is a new type of ICD, produced by the Boston Scientific Company, which does not require the insertion of electrodes inside the heart. The main feature of the S-ICD, compared to classic transvenous ICDs, is that it is exclusively implanted subcutaneously, and effectively performs defibrillation functions, without exposing the risks deriving from the insertion of leads through the venous system up to the cardiac chambers.

HOW IS THE S-ICD IMPLANTED?

The device is inserted under the skin in the axillary region, while the lead is inserted in the subcutaneous tissue in the sternal region of the chest, anterior to the heart. As with any surgical procedure, the S-ICD implantation is associated with potential risks, such as wound infection and bleeding. Generally, the S-ICD implantation requires a short hospitalization and is performed under local anesthesia, and the intervention lasts about an hour. 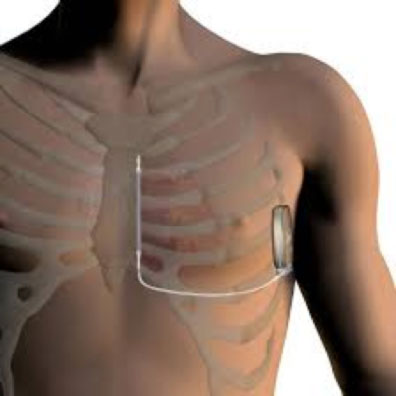 WHAT ARE THE ADVANTAGES OF AN S-ICD?

One of the reasons why Subcutaneous ICD was developed is to reduce the risk of complications associated with transvenous leads. Potential complications, such as systemic infections and the need to remove or replace leads in the heart, are in fact minimized or even eliminated with Subcutaneous ICD.

WHAT ARE THE DISADVANTAGES OF AN S-ICD?

S-ICD is not indicated in patients who need cardiac stimulation for bradycardias, tachycardias or cardiac resynchronization. Furthermore, the S-ICD is not suitable in all patients (for example in very young children, or very thin people). Finally, some patients have an ECG morphology that is not correctly recognized by the device, and are therefore not suitable for S-ICD.

FOR WHICH PATIENTS IS AN S-ICD DEVICE INDICATED?

The patients who benefit most from the implantation of a subcutaneous defibrillator (S-ICD) are young patients in the absence of structural heart disease. In fact, in these patients, who would be exposed to the risks involved with having an implanted device for a prolonged period of time because of their young age, having a subcutaneous defibrillator without electrodes inside the heart makes their future less complicated. Furthermore, the need for anti-tachycardia or anti-bradycardia stimulation is less likely in these patients.

CAN A PATIENT ASK TO RECEIVE AN S-ICD INSTEAD OF A TRADITIONAL ICD?

Unless an ICD is implanted in an emergency condition, a patient can express the preference for an S-ICD instead of a traditional transvenous ICD. However, the recommendation and the final choice on the type of ICD to be implanted (subcutaneous vs. transvenous) is the responsibility of the electrophysiologist, who will take into account the patient’s preferences, but also all the clinical characteristics of the patient and the disease.

IS REMOTE MONITORING OF AN S-ICD POSSIBLE?

Remote monitoring of the S-ICD can be performed through the Latitude system, with specific methods that will be explained by the Remote Monitoring Service.

If you want to know more: