What is nodal re-entry tachycardia (NRT)?

Nodal re-entry tachycardia (NRT or AVNRT, AV-nodal reentrant tachycardia) is the most common of the paroxysmal supraventricular tachycardias (PSVT) due to a re-entry mechanism. NRT is more frequent in women. Generally, it is not associated with organic heart disease. The first clinical manifestation occurs in the third or fourth decade of life, while it is rare in childhood and adolescence. The main symptom is palpitation with sudden onset and term, which can be associated with angina, anxiety, syncope, or cardiovascular failure. The severity of the clinical manifestations depends on the patient’s age, the duration of the arrhythmia, the frequency of tachycardia, and the presence or absence of associated heart disease.

What is the atrioventricular node?

The atrioventricular node (NAV) is formed by coalescence of two bundles of atrial fibers. These two beams not only have different electrophysiological properties but appear to be two distinct anatomical structures; the front section corresponds to the rapid route, while the rear section corresponds to the slow route. To better visualize these two ways, it is very important to know the anatomy of the Koch triangle. The three sides of the triangle are delimited by the tricuspid annulus (the portion of the annulus adjacent to the septal cusp), Todaro’s tendon and the coronary sinus ostium. The His bundle is located at the apex of the triangle. It is important to know that the apex of the Koch triangle (where the AV node and His bundle is located) is an anterior structure, while the coronary sinus is posterior and defines the posterior portion of the atrial septum. 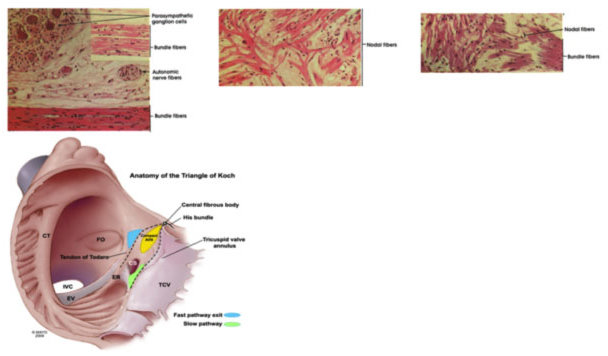 How is transcatheter ablation of nodal re-entry tachycardia (NRT) performed?

Since these two pathways are clearly identifiable, they can be subjected to the radiofrequency transcatheter ablation procedure. Initially the target of ablation was the rapid route, but being an anterior structure and very close to the AVN and the His bundle, the intervention was complicated in about 20% of cases with a complete AV block. The target then moved to the slow path, which, being rear and further away from sensitive structures, possesses a greater safety margin, since complete AV block in this case is described in less than 1% of cases. 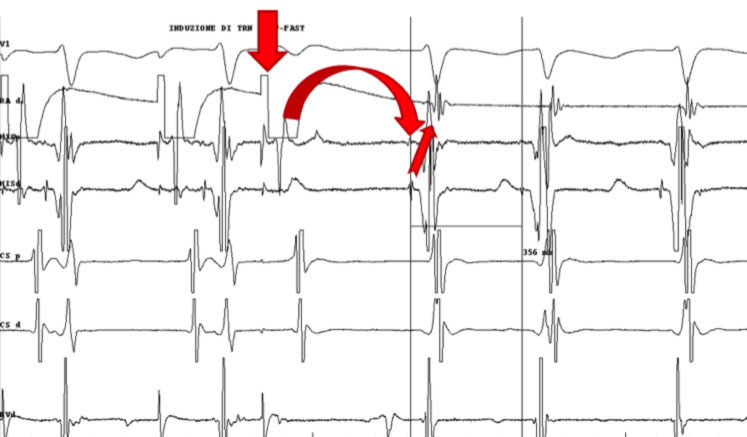 Two different types of approach are possible for slow path ablation: through electrophysiological or anatomical mapping. In both cases, the anatomical limits of the Koch triangle are first identified by placing one catheter on the His and one in the Coronary Sinus. The ablator catheter is then advanced through the femoral vein to the tricuspid annulus near the osteon of the coronary sinus (CS). 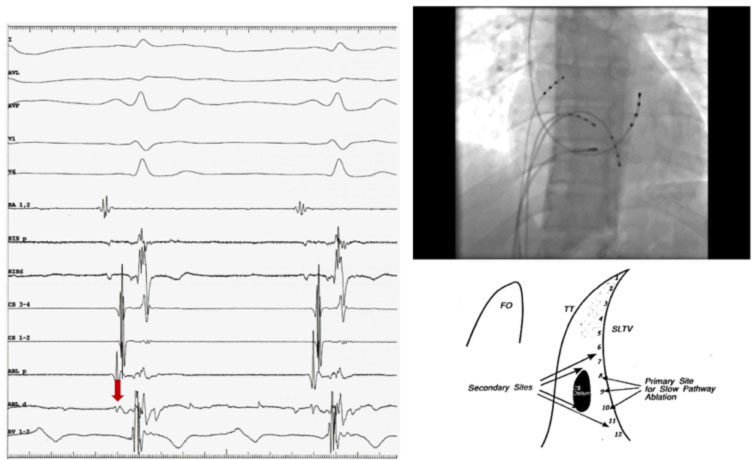 Generally, the portion of the tricuspid annulus between the ostium of the coronary sinus and the bundle of His is divided into three segments: posterior (near the ostium of the coronary sinus), medium, and anterior (near the bundle of His). The catheter is placed along the tricuspid valve and slid until the atrial and ventricular potential are recorded with the largest atrial deflection of the ventricular deflection. At this point RF is delivered, and generally if the position of the catheter is correct, it is possible to observe junctional beats or a junctional tachycardia. If after 10-15 seconds of RF, no junctional beats appear, it is good to stop the delivery and change the position of the scaler catheter. If, on the contrary, the junctional beats appear, it is good to supply RF for another 30-60 sec. 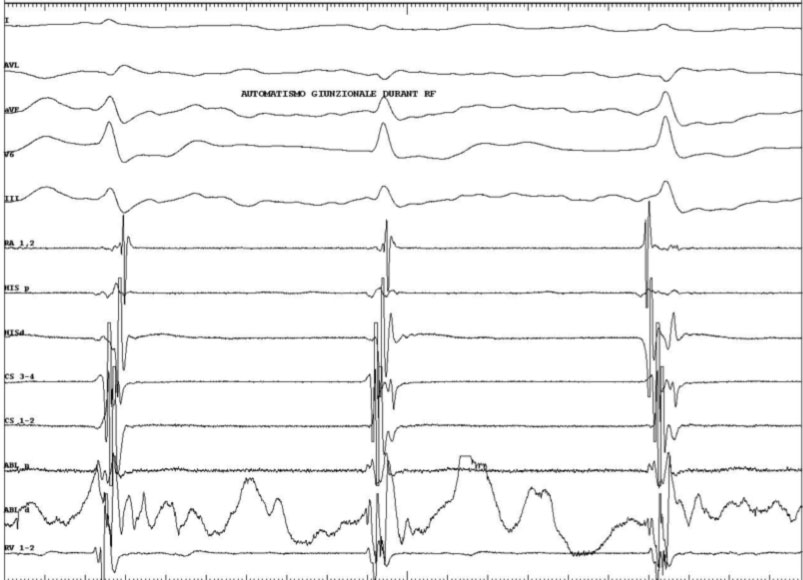 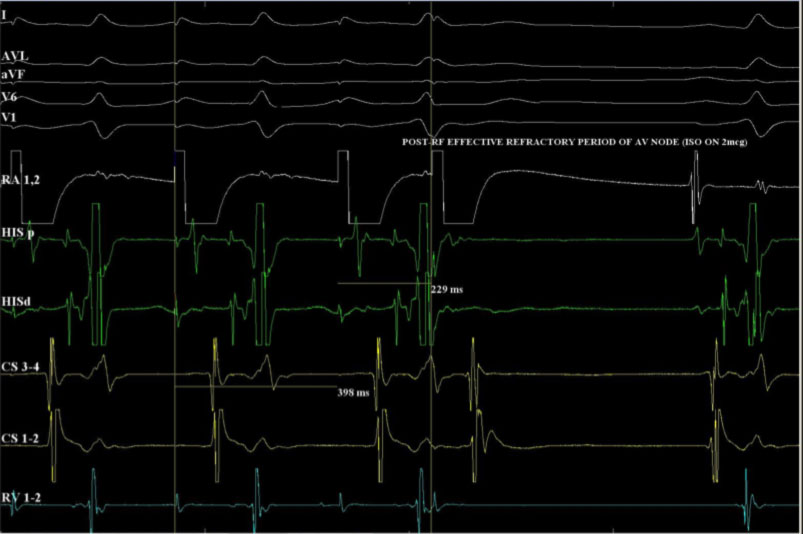 What is the goal of ablation in the NRT?

The ablation is considered successful if arrhythmia induction is impossible during the follow up electrophysiological study.

The main objective of the RF is the modulation of conduction along the slow path, blocking the nodal re-entry mechanism. The procedural objectives are summarized in the following table: 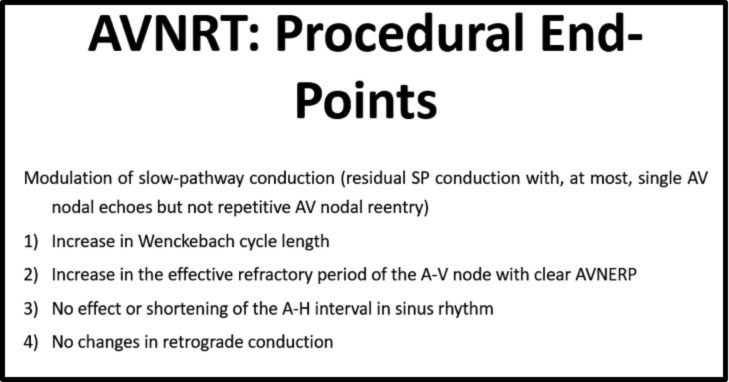 What are the risks of ablation in NRT?

Currently, given that the ablation target is now the slow path, positioned more posteriorly and therefore further away from the AVN and the His bundle, potentially sensitive structures, the intervention has a greater safety margin, with complete AV block (AVB) occurring in less than 1% of cases.

This risk is very reduced compared to the past, when the target of ablation was the rapid route, with a complete AVB risk of about 20%.

In the rare cases where a complete AVB is created today, even with the ablation of the slow path, pacemaker implantation may be necessary.