Anticoagulant drugs are drugs used to prevent thrombus formation and to hinder the growth of blood clots that have already formed. Thrombus formation can lead to the occlusion of the vessel or, in the case where the thrombus detaches from the vessel wall and enters the bloodstream, giving rise to a thromboembolic phenomenon, it can lead to very serious and sometimes fatal consequences, including myocardial and pulmonary infarction and cerebral stroke.

Unlike platelet anti-aggregating agents that act on platelet aggregation, anticoagulant drugs interfere with the coagulation process (the so-called coagulation cascade) by acting on co-factors and coagulation factors whose activation leads to the formation of a fibrin network that traps blood cells, giving rise to the clot. 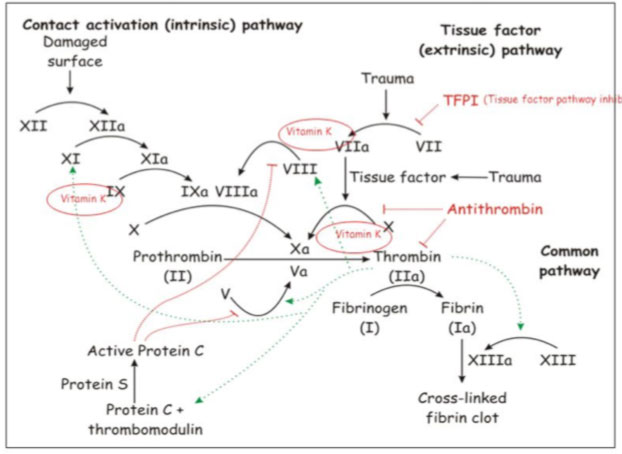 Currently there are different types of anticoagulant drugs, administered orally or parenterally, which can be divided according to the mechanism of action and according to their chemical structure, in the following way:

WHAT ARE THE INDICATIONS FOR ORAL ANTICOAGULANT MEDICINES?

Oral anticoagulants, according to the current guidelines, are prescribed in various clinical situations, both acute and chronic:

HOW EPARINIC DRUGS WORK AND WHEN TO USE THEM

Heparin is an endogenous compound, naturally present within organisms, located in the granules of mast cells, plasma and other tissues, consisting of a heterogeneous mixture of sulfated mucopolysaccharides (sulphated glycosaminoglycans).

Heparin (of animal origin) has been made available as a medicine. In particular, lower molecular weight derivatives have been obtained, which are administered exclusively parenterally by injection or infusion, depending on the case.

Given the need for parenteral administration, heparin is generally used in the acute phase and not in the chronic prevention of thromboembolism. The therapeutic applications of heparin are therefore in the prevention and acute management of arterial and venous thromboembolism in the following conditions:

HOW ANTICUMARINIC DRUGS WORK AND WHEN TO USE THEM

The most commonly prescribed drugs in chronic oral anticoagulant (TAO) therapy are still vitamin K antagonists (AVK). In particular, warfarin was the gold standard for decades in the prevention and treatment of these diseases.

Cumarinic anticoagulant drugs interfere with the redox cycle of vitamin K, a very important cofactor in the synthesis and activation of some vitamin K-dependent coagulation factors, such as factor II (prothrombin) and factors VII, IX and X The oxidation-reduction cycle of vitamin K involved in the blood coagulation process involves the intervention of different enzymes: vitamin K quinone reductase and vitamin K 2,3-epoxide reductase.

Cumarinic anticoagulant drugs are so defined because, from the chemical point of view, they are derivatives of coumarin (a natural organic compound), and act as inhibitors of vitamin K 2,3-epoxide reductase. The AVK drugs currently used in Italy are:

Given that the dose of anticoagulants required is highly variable among different individuals, it is necessary to regularly measure the coagulation time through a blood test, the INR (International Normalized Ratio), to be sure that the treatment is effective, safe, and the right dosage. The higher the value of the INR, the greater the fluidity of the blood.

The normal physiological value of the INR in a healthy subject is between 0.8 and 1.2 (the value may differ slightly from one laboratory to the other).

Depending on the pathology, different therapeutic ranges are prescribed. For example, in a patient in TAO for atrial fibrillation, the value of INR should be between 2 and 3. In patients with heart valves, an INR value between 3 and 4 is instead recommended.

Many drugs and foods can change the bioavailability of AVK drugs, and therefore make the value of INR highly variable. Therefore, patients in TAO must regularly undergo blood tests to check the value of the INR, since this must be adjusted if necessary so that the blood does not become too liquid or too thick.

The doctor who follows the patient then sets up a treatment plan according to an individual schedule (weekly / monthly) and sets the appropriate therapeutic amount to be taken daily (eg 1/2 tablet, or 1/4, etc.)

The side effects that can occur during therapy with coumarin anticoagulants are many, particularly:

The problems of using AVK drugs have led, in recent years, to replacing them with the new oral anticoagulant drugs (NAO). However there are at least two categories of patients in which the use of TAO is still recommended:

From the analysis of the studies comparing the efficacy and safety of the new oral anticoagulant drugs versus the coumarin drugs (warfarin) in the treatment of non-valvular atrial fibrillation (FANV), the following advantages have emerged:

Furthermore, NAOs have been shown to be safe and effective compared to traditional therapies in other cardiological fields, as in the case of dabigatran, used in antithrombotic therapy following angioplasty with stent insertion and in non-valvular atrial fibrillation subjected to electrical cardioversion.

The use of the new oral anticoagulants does not provide for a routine monitoring of coagulation due to the predictable nature of their pharmacokinetics. The dosage and the dosage interval, according to the guidelines, must not be changed in relation to the coagulation parameters.

The only tests to be performed are related to kidney function once a year or every six months, if: the patient is over 80 years old, is at high risk of bleeding, has moderate renal insufficiency or is in conditions that may impair kidney function.

NAOs have a bioavailability that varies depending on the drug used: dabigatran 37%, apixaban 50%, endoxaban 62%, rivaroxaban 66% fasted and 100% on a full stomach. The onset of the anticoagulant effect is rapid (a few hours compared to 4-5 days with warfarin) and the half-life is short: it varies from 5 to 17 hours.

NAOs are associated with lower drug and dietary interactions than warfarin. The interactions found are with the P-glycoprotein transporter (P-gp) and with the cytochrome P450 isoenzyme 3A4 (CYP3A4). Currently, no scientific evidence is available regarding the possible risks in the co-administration of food or herbal medicines and NAOs (Di Minno et al., 2017). 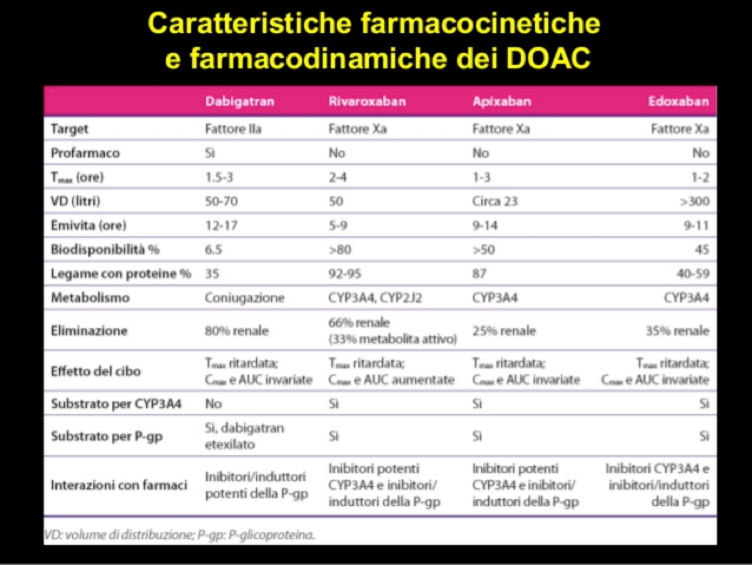 The main drug interactions of NAOs are with some anticonvulsants / antiepileptics, antifungals, antibiotics and HIV protease inhibitors: 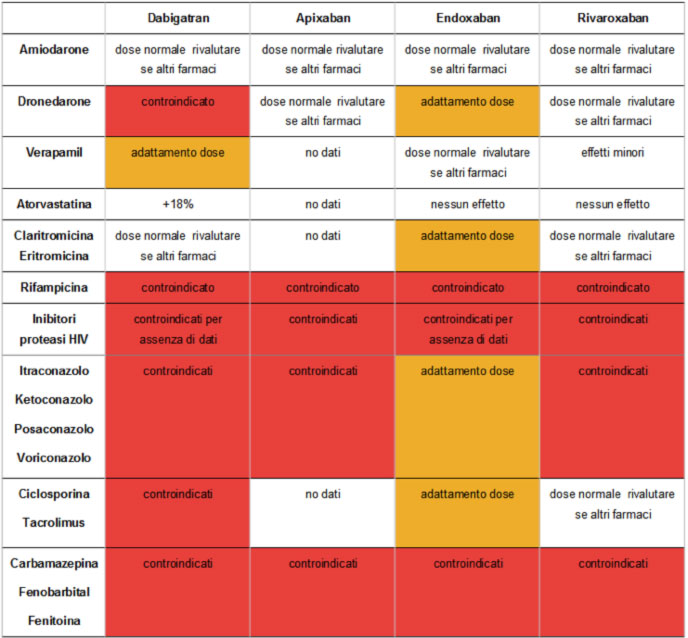 Emergencies The blood concentration of DOACs and the related anticoagulant activity can be measured in emergency situations (severe bleeding, thrombosis, need for surgery or in specific clinical conditions) by specific tests depending on the type of anticoagulant used. The analyzes that can be performed for direct thrombin inhibitors are: aPTT; the thrombin time (TT), which is very sensitive to the presence of dabigatran; ecarin coagulation time (ECT); the diluted thrombin time (dTT). The specific laboratory tests indicated for factor Xa inhibitors are: prothrombin time (PT), which provides quantitative information regarding rivaroxaban, and chromogenic anti-FXa.

The positive aspect of DOAC in the event of hemorrhage is the short half-life. If there is a need to quickly counteract the anticoagulant effect of these drugs, you can do so by using:

The management of DOAC before and after a surgical operation varies according to the bleeding risk of the procedure and to the patient’s renal function: 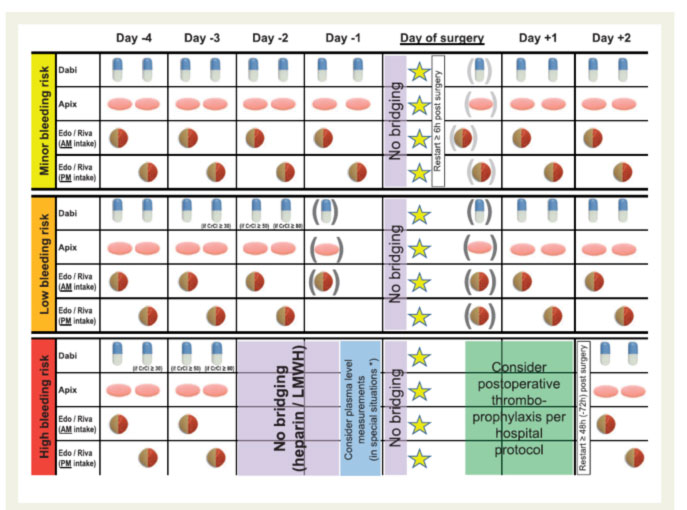 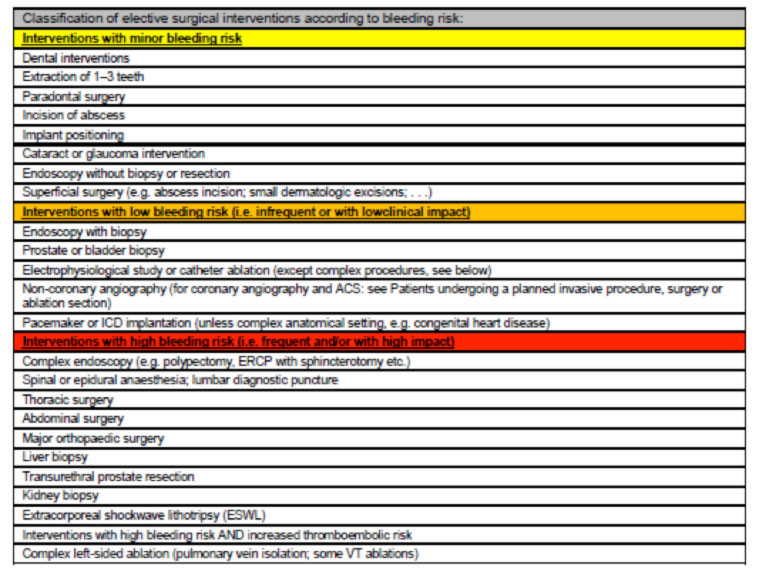 Possible side effects related to oral anticoagulant therapy include gastrointestinal bleeding, intraocular hemorrhage and alopecia. However, these effects are also associated with traditional anticoagulants, and are generally reversible with drug withdrawal.

DOACs facilitate adherence to therapy, thanks to a reduction in the limits imposed by the practical management of therapy, such as the absence of routine monitoring of blood tests, the fixed dosage regimen, the need for specialized centers nearby, and the minor dietary and pharmacological interactions.

However, the fact that there is no test capable of providing information regarding the overall adherence to therapy (such as the INR for vitamin K antagonists), in addition to the short half-life and the absence of frequent controls, makes it crucial to prevent over- and under-dosing.