The heart contracts thanks to specialized cellular structures that generate electrical impulses and regulate their distribution in the heart itself. Under normal conditions, the electrical impulse originates in the atrial sinus node, propagates in the atria and reaches the atrioventricular node, which is the only way of electrical communication between atria and ventricles; from here the impulse passes to the His bundle and to the intraventricular conduction system. 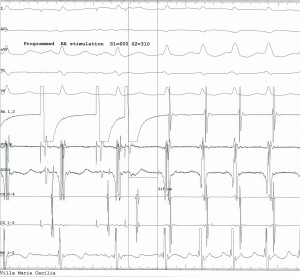 Nodal re-entry tachycardia is characterized by arrhythmic episodes with sudden onset and remission. The episodes have a duration ranging from a few seconds to days, and, in the absence of other cardiac pathologies that compromise its functionality, it is usually well tolerated. The most common symptoms include palpitations, nervousness, anxiety, lightheadedness, dizziness, chest pain, and dyspnea. A polyuria can occur after the termination of the arrhythmia due to the release of atrial natriuretic factor. Although NRT generally has a benign course, it can cause or worsen heart failure in patients with reduced left ventricular function, as well as cause angina or myocardial infarction in patients with coronary artery disease. Syncope can occur in patients with a very rapid ventricular response or with prolonged tachycardia due to poor ventricular filling, resulting in reduced cardiac output, hypotension, and reduced brain perfusion. However, it can also occur due to transient asystole at the end of tachycardia, due to tachycardia-induced sinus node depression. 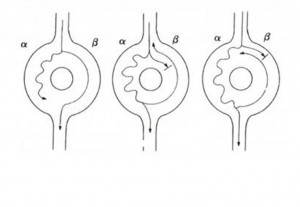 The AV node in patients with NRT behaves functionally as if it were made up of two distinct ways through which the impulse can travel. The two pathways (alpha and beta) differ from each other by their electrophysiological characteristics. The alpha, or slow path, usually has a relatively short effective refractory period (ERP) and leads slowly. The beta, or rapid pathway, instead has a relatively long effective refractory period and a higher conduction velocity. This condition is known as nodal conduction duplicity. In patients with nodal conduction duplication, a normal sinus beat will be conducted to the ventricles via the beta, or rapid, path of the AV node, as this leads faster than the alpha pathway. Otherwise, a sufficiently early atrial impulse can reach the AV node when the beta, or rapid, pathway is still refractory, due to the effect of conduction from the previous beat, and can therefore be conducted to the ventricles only through the alpha, or slow, pathway. In this case, the impulse will be conducted through the AV node with a modest delay compared to a normal beat, due to the lower conduction speed of the beta, or slow, path. This phenomenon occurs on the surface ECG with prolongation of the PR interval following an atrial extrasystole. If the delay in the propagation of the impulse produced by conduction through the slow path is such that it reaches the distal portion of the node when the beta, or rapid, path has regained its ability to conduct (i.e. it has reached the end of the refractory period), it will be able to travel retrogradely the fast way, giving rise to an atrial echo beat. This echo beat can behave like the initial atrial impulse and repeat the conduction cycle in an antegrade direction through the slow path and retrograde through the rapid path giving rise to a re-entry mechanism through the AV node.

The management of an acute attack depends on the symptoms, the presence of cardiac pathologies, and the evolution of previous arrhythmic episodes. Simply resting, reassuring the patient, and sedation can end the arrhythmia. In any case, before approaching drug therapy, some vagal maneuvers should be tried (carotid sinus massage, face immersion in cold water, Valsalva maneuver). Sometimes, however, vagal maneuvers are not so simple to implement and also should not be attempted in case of hypotension. Drugs that can be used to end an arrhythmic episode include adenosine, calcium channel blockers, beta blockers, and digitalis. Electrical cardioversion is applied in case of compromised hemodynamic status of the patient or in case the pharmacological cardioversion has not been successful. Competitive atrial or ventricular pacing can also be useful, in particular, when electrical cardioversion is contraindicated (for example when high doses of digitalis have been administered). Prophylactic therapy is necessary if the patient is very symptomatic or the episodes are very frequent and prolonged. Currently, however, the gold standard for NRT therapy is transcatheter ablation by radiofrequencies.