When to ablate atrial tachycardias?

Atrial tachycardias constitute a heterogeneous group of atrial arrhythmias which differ in their location and pathophysiological mechanism and which, however, represent an uncommon cause of supraventricular arrhythmias.

It is estimated that 5% of supraventricular arrhythmias in adulthood and 15% of pediatric arrhythmias are attributable to this group of arrhythmias.

If drug therapies are not sufficient to control arrhythmic manifestations, it is possible to resort to transcatheter ablation with the goal to eliminate by thermal energy (radio frequency or cryablation) those cells that are responsible for the genesis of the arrhythmia. TCRF ablation is always preceded by an electrophysiological study that enables the identification of the targets and which is often integrated with the new electro-anatomical mapping systems.

What is the role of the electrophysiological study in patients with atrial tachycardia?

The electrophysiological study is the first step for ablation. It enables the identification of the specific location and the pathophysiological mechanism of the arrhythmic phenomenon. The surface electrocardiogram is not sufficient in most cases to specify these aspects.

Typically, 3 or 4 femoral venous accesses (from the groin) and one subclavian (from the acellar cavity) are obtained. Through these accesses, quadripolar leads are positioned in the right atrium at the level of the sinus node, then at the bundle of His and the right ventricle. An additional diagnostic lead is placed in the coronary sinus, a vein that runs into the left ventricular atrium sulcus and therefore shows us the electrical signals that come from the left side of the heart.

At this point it is possible to start stimulation maneuvers through which the arrhythmia is triggered. Sometimes it is necessary, especially in automatic forms, to resort to the use of drugs such as isoproterenol, capable of mimicking an adrenergic stimulation (similar to that which occurs when doing physical activity). 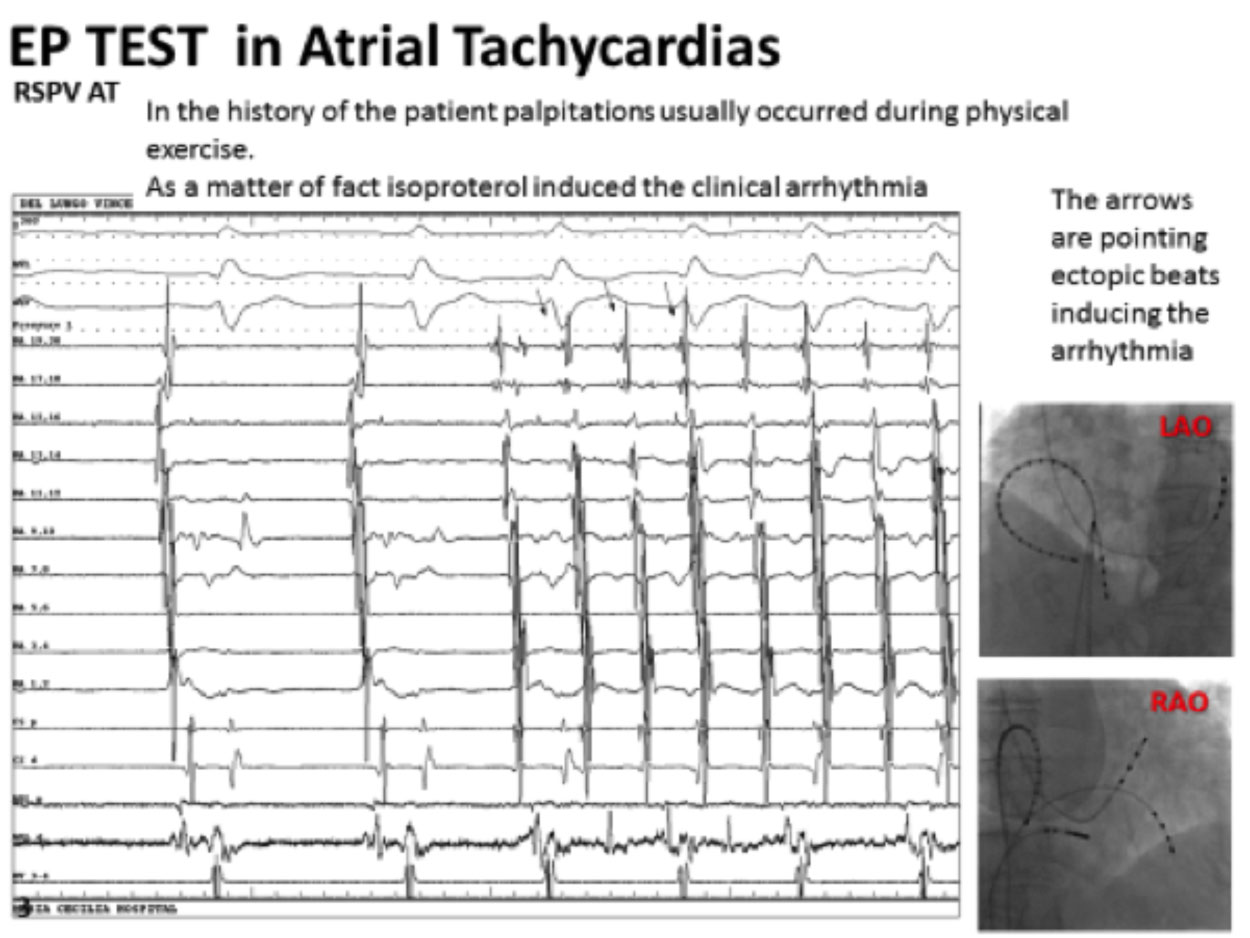 The electrophysiological study is also essential to make a differential diagnosis with other arrhythmias that may “resemble” atrial tachycardia.

What are the mapping systems used in the ablation of atrial tachycardia?

Non-fluroscopic three-dimensional mapping systems represent a considerable technological advancement in electrophysiology laboratories. These are software that allow you to “reconstruct the heart chambers” by adding the electrical substrate of each cardiac region to the anatomy. The three-dimensional mapping systems give information on the voltage of the fabric allowing us to obtain an indirect measure of the quality of the fabric itself (an electrically inert fabric or without measurable electrical signals is a “dead” fabric, or a scar, called “scar”), and to obtain information on the propagation of the signal of the electrical signal in real-time (activation map) and on the presence of anomalous electrical signals such as fragmented potentials. 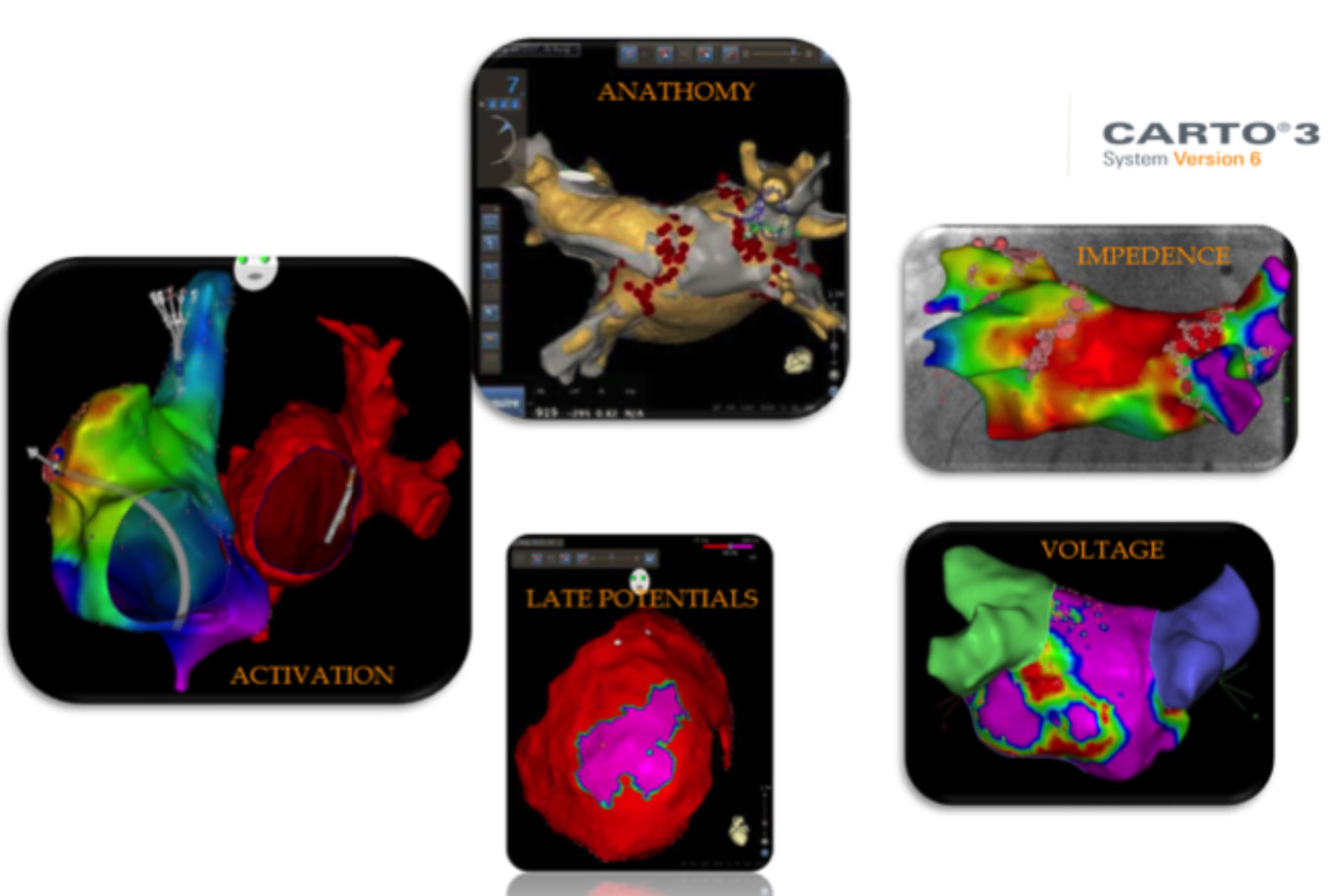 The mapping systems are therefore a valuable aid for identifying the location and pathophysiological mechanism of atrial tachycardia.

Also of primary importance is the possibility of minimizing exposure to ionizing radiation from the scopia, making the procedure safer also from this point of view for both the patient and the operator.

What are the risks of ablation of atrial tachycardias?

The risks related to the ablation of atrial tachycardia are minimal and generally related to venous access. In fact, vascular damage could occur in the femoral puncture, which could remain in the formation of a hematoma, an arteriovenous fistula or a pseudoaneurysm. In most cases these complications require only a conservative attitude or compressive dressings. Other times it is necessary to resort to more invasive procedures, such as percutaneous embolization or surgical approach for the exclusion of the fistula or pseudoaneurysm.

Among the risks of the procedure, even if present in the literature, cardiac perforation with consequent cardiac tamponade is very rare. Even these complications, although serious, can be safely managed in the operating room and rarely require a surgical approach.