The pharmacological test results in an unbalance of the sodium current (Ina), in favor of the repolarizing current Ito. This modification of ion flow modifies the action potential at the cellular level, which is evident on the ECG tracing with the appearance of the Brugada type 1 pattern, with an increase in the J wave and convex elevation of ST with a negative T in the precordial right (Figure 1). 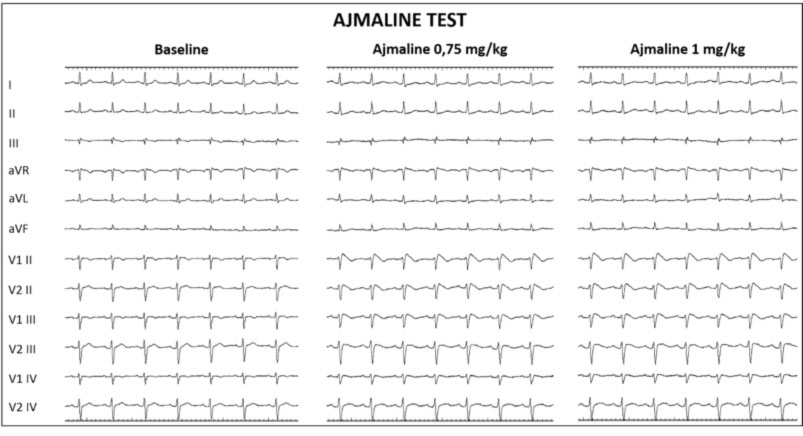 On the contrary, drugs that also depress the Ito current as well as Ina, such as Quinidine (class 1A drugs), not only do not accentuate the J wave and the ST leveling, but they can even counterbalance the electrical phenomenon, so that in some cases the administration of quinidine is able to normalize the ECG. Indeed Quinidine has also been used successfully for the prevention of arrhythmias in patients with BrS.

The pharmacological test can be performed in a day hospital or after a short hospitalization. The test is performed by intravenous infusion according to the following dosages:

In our center, the pharmacological test is carried out in the electrophysiology room, in the presence of equipment and personnel suitable to intervene in case of emergencies or complications.

In our center, the ajmaline test is used routinely. It is more sensitive and more specific than the Flecainide test, since the ajmaline test has a diagnostic power (i.e. the probability of obtaining a correct diagnosis) in about 97% of the subjects studied. The use of high right precordial derivations has provided a further increase in the diagnostic power of the pharmacological test.

Ajmaline is not used in other centers, as this drug is not usually available in Italy. It is available at our center thanks to a special agreement and authorization by the Ministry, in collaboration with a German pharmaceutical company.

Pharmacological tests are used specifically to confirm the diagnosis of BrS, while the clinical prognostic significance of the test for arrhythmias has been repeatedly questioned. Brugada et al. found a high sensitivity of the test in predicting a subsequent cardiac arrest, while others observed a very low positive predictive power against a subsequent cardiac arrest (only 8%), with a negative predictive value of 95%, a sensitivity 88% and a specificity of 22%.

According to the current Guidelines, the provocative test with sodium channel blocking drugs is useful in patients with ECG patterns type 2 and 3. In these cases, the test is positive (diagnostic) when the drug induces a transformation of the ECG pattern into type 1. Routine testing is not recommended in patients with spontaneous type 1 patterns, but may be performed in specific clinical situations.

It should, however, be stressed that the test, although safe in most cases, is not without risk: by administering these drugs to predisposed subjects (at high risk), it is possible not only to unmask the typical Brugada type 1 pattern, but also to induce life-threatening arrhythmias, such as tachycardia and ventricular fibrillation, or in rare cases, electromechanical dissociation.

In our center, the ajmaline test is generally carried out in association with the electrophysiological study (EPS), to verify the inducibility of malignant ventricular arrhythmias (sustained ventricular tachycardia or ventricular fibrillation). In the event of a positive EPS, the cardiac defibrillator implant is generally proposed.

In our center, the ajmaline test is not practiced in children, but is generally practiced in adolescence, starting from 15 years of age.

In patients with a positive pharmacological test, but with a negative EPS, due to the lack of induction of malignant ventricular arrhythmias, the subcutaneous loop recorder implant can still be proposed, for remote surveillance of the occurrence of any spontaneous cardiac arrhythmias.