Syncope is defined as a loss of consciousness characterized by sudden onset, short duration, and spontaneous and generally complete recovery of consciousness. The onset of syncope can be sudden, or preceded by warning symptoms (called “prodromes”) such as dizziness, sweating, nausea, asthenia. Syncope is a symptom frequently encountered in clinical practice and is responsible for approximately 1-3% of emergency room visits.

What are the causes of syncope?

The mechanism that causes syncope is a transient reduction in cerebral perfusion, due to a reduction in blood flow (i.e. “systolic flow”).

While neuromediated syncope and orthostatic hypotension syncope are typically benign, cardiac syncope is often associated with heart disease and generally has a worse prognosis, and can also prove fatal. 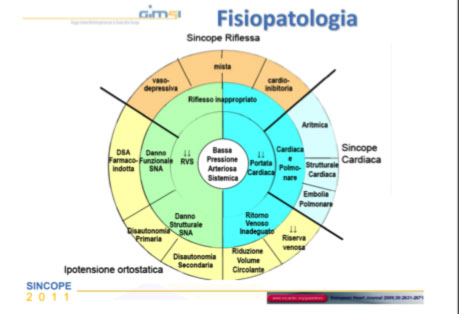 What is neuromediated (or vasovagal or reflex) syncope?

Neuro-mediated (or vasovagal or reflex) syncope results from a transient anomaly in the functioning of the autonomic nervous system, responsible for regulating blood pressure and heart rate. Neuromediated syncopes are the most frequent in the general population, mainly affecting young people and are a benign disorder. If very frequent, however, it can create risky situations for the patient or for other people, for example while driving. The pathogenetic mechanism depends on an intense vagal activation that stimulates cardiac receptors that cause slowing of the heart rate and hypotension with the onset of syncope.

Neuromediated syncope often occurs during typical situations, such as standing in crowded or hot places, after strong emotions, or even during urination. The most effective “therapy” consists in trying to prevent those situations that often lead to syncope, and in learning to recognize the warning symptoms, thus assuming the sitting position or lying down to prevent complete loss of consciousness. In some cases, low-dose beta-blockers or aminophylline drugs can be used.

What is orthostatic (or postural) hypotension syncope?

Orthostatic (or postural) hypotension syncope depends on an excessive drop in blood pressure when standing upright. The accepted definition is a drop > 20 mmHg of systolic, 10 mmHg of diastolic, or both. Syncope is often preceded by prodromes such as weakness, clouding, dizziness, confusion or blurred vision that occur within minutes of positioning upright and quickly disappear while lying down. Exercising or a heavy meal can accentuate the symptoms.

The most frequent causes of acute orthostatic hypotension include a reduction in palsmatic volume (hypovolemia), the use of drugs, prolonged bed rest, age-related changes in blood pressure regulation, autonomic dysfunction (for example in Parkinson’s disease or diabetes mellitus).

Postprandial orthostatic hypotension is also frequent, and can be caused by insulin response to carbohydrate-rich meals and blood collection in the gastrointestinal tract, and is worsened by alcohol intake.

Orthostatic hypotension syncope is more frequent in the elderly patient, and the main problems involve being a fall risk, i.e. head injury or a fracture of the pelvis or femur, which can be accompanied by a syncope that occurs when moving to an upright position.

Some precautions can reduce the risk of orthostatic syncope, such as drinking a lot of water and ensuring a correct intake of salt, reducing hypotensive drugs, avoiding standing for a long time without moving, trying to move from sitting to standing upright, avoiding abrupt movement, and engaging in constant physical activity.

What is cardiac syncope?

Cardiac syncope is caused by an abrupt reduction in cardiac output, due to cardiac arrhythmias (bradyarrhythmias and tachyarrhythmias) or from structural heart disease (myocardial infarction, hypertrophic cardiomyopathy, valvular heart disease, atrial myxoma, or cardiac tamponade) or vascular (such as pulmonary embolism, aortic dissection, or congenital anomalies of the coronary arteries).

Arrhythmic causes include forms due to bradyarrhythmias, such as brady-tachi syndrome, blockages of atrioventricular conduction, malfunction of implantable cardiac devices, or drug-induced bradycardia.

Cardiac syncope most often requires emergency treatment, with the need to bring the patient to the emergency room, since in some cases it puts the patient at risk of sudden death.

In the case of suspected cardiac syncope, a thorough diagnostic procedure is necessary, and in the case of diagnosis of arrhythmic syncope, the use of antiarrhythmic drugs, or the implantation of a pacemaker, or a defibrillator, or transcatheter ablation procedures may be necessary.

How is the diagnosis of syncope made?

According to the recent guidelines of the European Society of Cardiology of 2018, patients with syncope must undergo an accurate medical history, physical examination, blood pressure measurement in a lying and standing position, and a 12-lead ECG.

Conditions must be reported by the patient, including the conditions preceding the syncope, those related to the onset of the syncope and its modalities, the end of the syncope and any disturbances that persist after the recovery of consciousness, the history of previous cardiac, metabolic and neurological pathologies and the recurrence of syncope, that is, the time from the first episode and the number of episodes. The initial evaluation, if well done, allows to ascertain the etiology of syncope in about half of the cases.

The physical examination must include the detection of the following parameters:

In case of suspected cardiac syncope, the diagnosis must be confirmed with specific instrumental tests such as:

In the case of recurrent syncopes of suspected neuromediated origin, the execution of the Tilt test with evaluation of the autonomic nervous system is indicated.

Have you had a syncope and need a visit or hospitalization? click here