What is Atrial Flutter?

Typical or common atrial flutter (AFL type 1), is a relatively frequent form of atrial arrhythmia that often occurs in association with atrial fibrillation and may be the cause of major adverse events, such as cardioembolic stroke, myocardial ischemia, and sometimes tachycardia-induced cardiomyopathy, due to rapid atrioventricular conduction.

The AFL is typically a regular atrial rhythm due to a re-entry circuit that involves most of the right atrium (right atrial macrorientro). The atria depolarize at a frequency of 250-350 beats / min. Since the atrioventricular node is not able to conduct at this speed, the impulses are conducted to the ventricles according to a conduction ratio that can be fixed, giving a regular ventricular rhythm (for example in case of conduction 2: 1, with FC 150 bpm) or variable from moment to moment, according to variable conduction ratios (3: 1, 4: 1, or 5: 1), giving a regular ventricular rhythm and sometimes irregular.

AFL symptoms include palpitations, exercise intolerance, dyspnea and presyncope. As in atrial fibrillation, atrial thrombi can form, which can then embolize. The AFL diagnosis is based on the ECG, which highlights the atrial activation with the typical saw-tooth pattern (called F waves), evident in the lower derivations (D2, D3, avF).

The treatment of AFL includes the control of frequency with drugs, the prevention of thromboembolism with anticoagulant therapy and, often, the conversion to sinus rhythm with drugs, cardioversion, or transcateter ablation of the substrate (right atrial macrorientro).

What is the electrophysiological substrate of atrial flutter?

The AFL substrate is complex and includes conduction slowing in the vicinity of the cable-tricuspidal isthmus (CTI) and / or the functional conduction block along the crista terminalis and Eustachian crest. This electrophysiological background determines an ideal condition for the formation of a macrorientro circuit at the level of the right atrium. The triggers of atrial flutter may be various, and include atrial extrasystole or atrial fibrillation itself.

Schematic representation of the activation pattern in typical flutter and in typical reverse flutter. (visualization through the tricuspid valve looking from the ventricle towards the atrium). In typical flutter (A) the falling front wave rotates in the right atrium counterclockwise, while in the flutter, reverse clockwise. The terminal ridge and the Eustachian ridge represent anatomical blocks. The area of the cavotricuspidal isthmus is a slowing conduction area. SVC: superior vena cava; CT: terminal ridge; IVC: inferior vena cava; ER: eustachian crest; CS: coronary sinus; TV: three-way valve

What are the techniques for the transcatheter ablation of Atrial Flutter?

In consideration of its well-defined anatomical and electrophysiological substrate and its resistance to drug therapy, the catheter ablation of AFL has established itself as the therapy of choice.

TCRF ablation techniques are multiple and can sometimes employ the latest 3D electroanatomical mapping systems. To date, however, the most widely diffused is the fluoroscopic technique focused on the ablation of the tricuspid histology.

Following local anesthesia and mild sedation, puncture of the right femoral vein and left subclavian vein is performed using the Seldinger technique. They are positioned under fluoroscopic guidance of diagnostic leads at the apex of the right ventricle (tetra-polar) and right atrium (duodecapular HALO) via the femoral vein, and of the coronary sinus via the subclavian vein (tetra-polar). 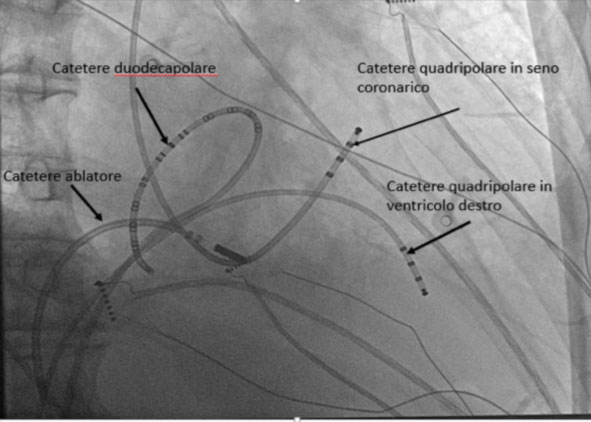 If the procedure is carried out in the course of atrial flutter, the typical counter-clockwise propagation of the flutter is observed, which proceeds from the atrial septum to the lateral region of the isthmus. 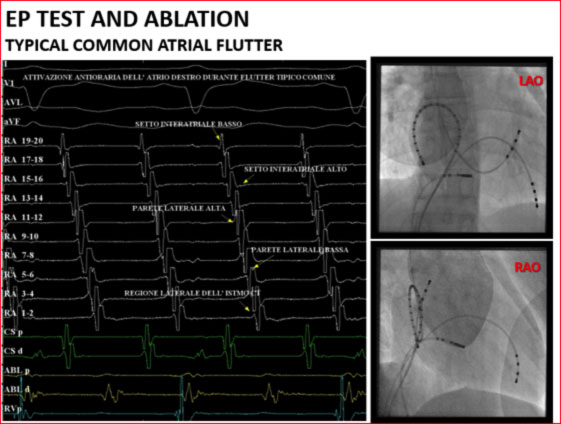 An ablator lead is then introduced and a lesion line is made at the level of the hollow-tricuspid isthmus by means of radiofrequency deliveries with consequent interruption of the atrial flutter. 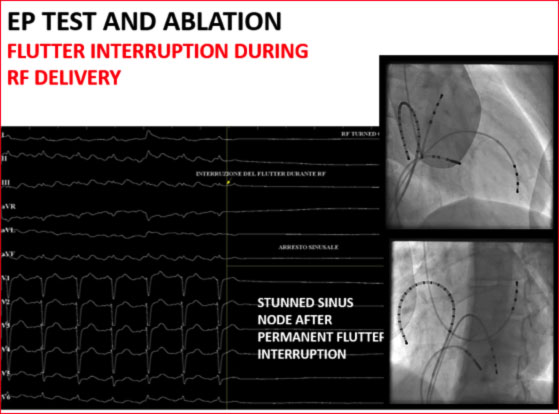 Alternatively, if it is not possible to induce the clinical arrhythmia during the procedure, it is possible to perform the ablation of the hollow-tricuspid isthmus even in sinus rhythm during fixed pacing by the coronary sinus. 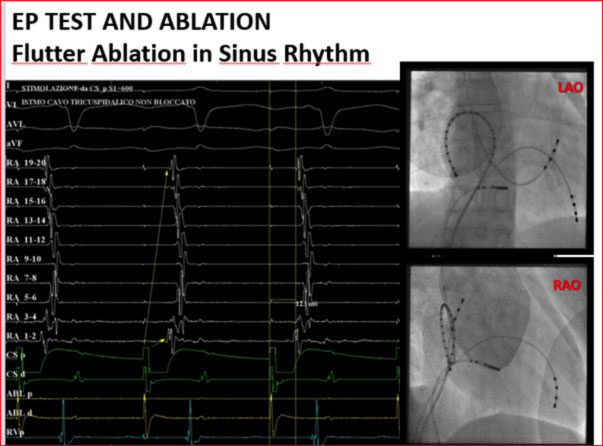 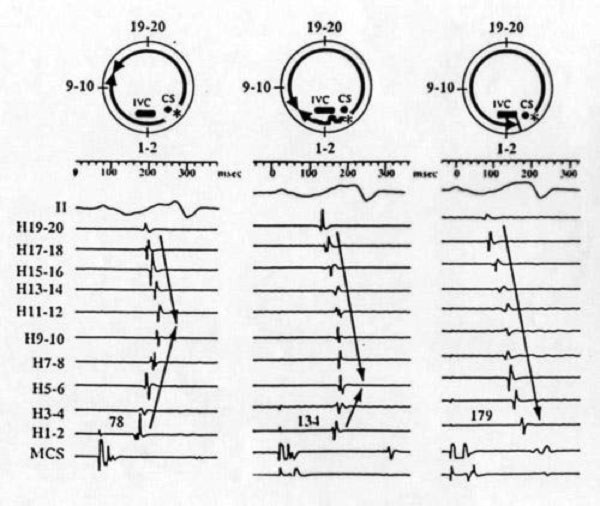 At the end of the procedure, the achievement of the bidirectional conduction block is highlighted. 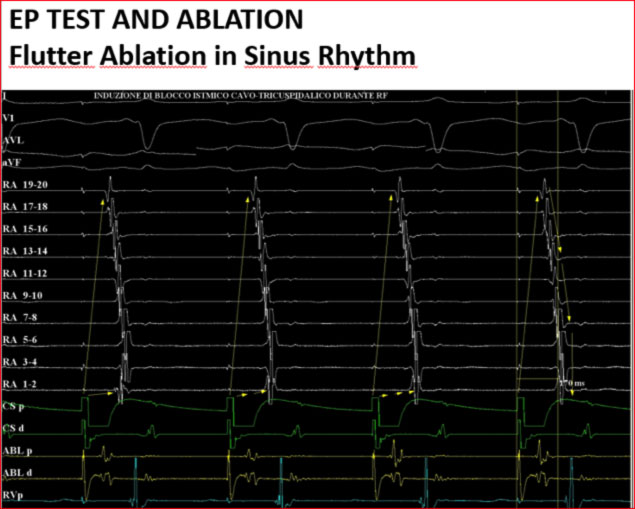 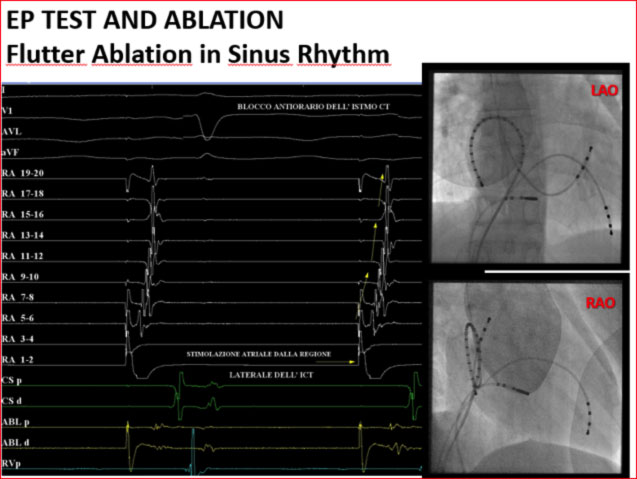 How does the Transcatheter Ablation (TCA) procedure of atrial flutter occur?

The AFL TCA procedure takes place in a hospital. The procedure is performed with the patient conscious, after local anesthesia in the venous access area (right femoral). The duration of the procedure may vary depending on the difficulty of identifying and interrupting the return circuit (on average 1-2 hours). In the absence of complications, discharge takes place 1-2 days after the procedure.

What are the risks of atrial flutter ablation?

The procedure is generally well tolerated; the only discomforts for the patient may be the finding of vascular access and, in some cases, the at the time of ablation when a burning sensation can occur in the chest. During the procedure, it is possible that the patient also feels tachycardia, which the operator tries to trigger in order to be able to adequately map it and find its source circuit.

The complications of atrial flutter ablation are very rare. The AFL TCA procedure takes place in a suitable environment and by personnel trained to deal with any rare complications.

How does the follow up of the Atrial Flutter ablation take place?

Subsequent AFL follow-up checks for TCA include clinical evaluations and periodic execution of Holter ECG monitoring in order to detect possible recurrences. In our center, generally after ablation, the insertion of an implantable loop recorder is scheduled, which allows the monitoring of the cardiac rhythm for about 3 years, even through remote monitoring.