What is Atrial Flutter?

Atrial flutter is a relatively frequent form of atrial arrhythmia that often occurs in association with atrial fibrillation and can cause important adverse events, such as cardioembolic stroke, myocardial ischemia and sometimes tachycardiomyopathy, due to rapid atrioventricular conduction. AFL symptoms include palpitations, exercise intolerance, dyspnoea and presyncope. As in atrial fibrillation, atrial thrombi can form, which can then embolize.

The atrial flutter is due to a re-entry macrocircuit, generally located in the right atrium, and is not very sensitive to antiarrhythmic drugs commonly used for atrial fibrillation (class I and III). Transcatheter radiofrequency ablation is the therapy of choice for the treatment of atrial flutter.

What are the electrocardiographic features of atrial flutter?

The diagnosis of AFL is based on the 12-lead ECG or on the ECG according to Holter, which highlights the atrial activation with the typical sawtooth pattern (called F waves). In the case of atrial flutter, the atria depolarize at a rate of 250-350 beats/min. Since the atrioventricular node is unable to conduct at this speed, the impulses are conducted to the ventricles according to a conduction ratio that can be fixed, giving a regular ventricular rhythm (for example in the case of 2:1 conduction, with FC 150 bpm) or variable from moment to moment, according to variable conduction ratios (3:1, 4:1, or 5:1), giving a regular and sometimes irregular ventricular rhythm.

The common isthmus-dependent right atrial flutter (type 1 counterclockwise) is the most common form (about 80% of cases) and is typically a regular atrial rhythm, due to a re-entry circuit involving a large part of the right atrium (atrial macro-reentry right), consisting of the slowing of conduction near the hollow-tricuspid isthmus (CTI), i.e. formed by the tricuspid ring anteriorly and posteriorly by the ostium of the inferior cava in the right atrium, and/or the functional conduction block along the crista terminalis and Eustachian ridge (circuit a). The ECG shows typical sawtooth F wave patterns, evident in the lower leads (D2, D3, avF) (Figure 2). The type 1 form responds best to trancatheter ablation.

Uncommon isthmus dependent atrial flutter (reverse, type 2) is less frequent (about 10%), and is due to a circuit identical to the common flutter, however travels in the opposite direction (reverse, circuit b). The wavefront proceeds clockwise downwards along the septal wall, slowing down near the tricuspid hollow isthmus, then rising upwards along the side wall towards the atrial roof. The ECG shows positive F waves (sawtooth upside down) in the lower branches (DII, DIII, aVF), low voltage biphasic in I and aVL and negative in V1 (Figure 3). 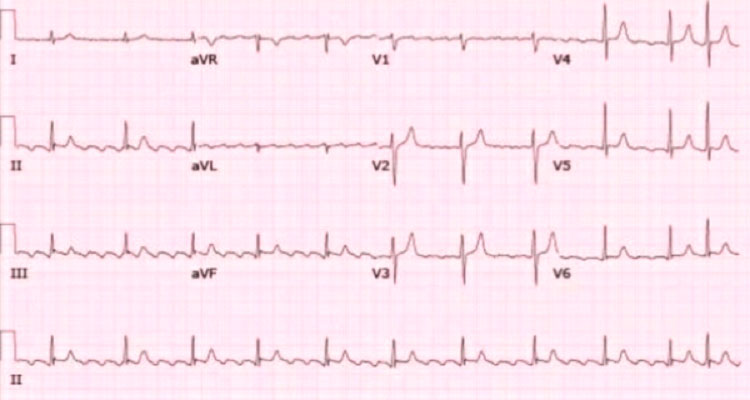 Atypical atrial flutter instead, it is a regular, sometimes rapid, atrial tachycardia, based on a macro-reentry circuit not dependent on the tricuspid vena cava-ring isthmus, which can occur in the right or left atrium. The ECG does not have typical aspects, and the F waves have a sinusoidal aspect with variable voltage.

What are the causes of atrial flutter?

Atrial flutter has an incidence 2-5 times higher in males than in females, and is more frequent in the elderly, although the evaluation of its real incidence is uncertain.

The causes of atrial flutter are numerous, and the most frequent factor is heart disease. Compared to atrial fibrillation, atrial flutter occurs more rarely in the absence of structural heart disease, and is more frequently associated with heart disease with atrial dilation (congestive heart failure, mitral and tricuspid valvulopathy).

What are the treatments for atrial flutter?

Pharmacological control of rate is more difficult to achieve in atrial flutter than in atrial fibrillation. The frequency response is generally controlled with beta-blocker drugs or non-dihydropyridine calcium channel blockers (verapamil and diltiazem), or with digitalis. Conversely, many of the antiarrhythmic drugs that are used in the case of atrial fibrillation to restore sinus rhythm (especially those of class Ia and Ic) can slow down the atrial flutter and reduce the refractoriness of the atrioventricular node (due to their vagolytic action), so as to promote 1:1 conduction, which can cause an undesired and dangerous increase in the ventricular rate and lead to hemodynamic compromise. These drugs can instead be used to prevent relapses, to maintain long-term sinus rhythm.

Patients with permanent or relapsing atrial flutter require oral anticoagulant therapy, or with a vitamin K inhibitor (warfarin titrated to an INR between 2 and 3) or with a direct thrombin inhibitor or a factor Xa inhibitor), similarly to what is recommended for atrial fibrillation.

Transcatheter radiofrequency ablation procedures are effective in preventing atrial flutter, especially the typical form. In the case of a typical isthmus-dependent flutter, the macro-reentry circuit is ablated, generally located in the right atrium, near the hollow-tricuspid isthmus (CTI) and/or along the crista terminalis and Eustachian ridge.