What is Wolff Parkinson-White syndrome (WPW)?

In 1930, Doctors Wolff, Parkinson, and White reported 11 young, healthy patients with particular ECG characteristics, which included a short PR interval and a branch block-like intraventricular conduction anomaly. These patients suffered from paroxysms of SVT. This clinical picture eventually became known as Wolff-Parkinson-White syndrome (WPW). The anomalies of the QRS complex were initially thought to be related to a short PR and a branch block; Kent first proposed the presence of atrioventricular extra-nodal connections to explain ventricular pre-excitation. One of the main reasons for the interest in WPW syndrome over the years has been associated morbidity and mortality. There is a consolidated relationship between the presence of symptoms and the risk of sudden death (SD). In asymptomatic patients with WPW, the percentage of SD is low and is estimated at about 1:1,000 patient-years. In a young symptomatic patient with WPW syndrome, the incidence of SD during life was estimated at 3-4%. In some patients, ventricular fibrillation was the first manifestation of this syndrome.

What is the clinical presentation of WPW syndrome?

WPW syndrome can occur in the presence of a structurally healthy heart, or it can be associated with numerous cardiac conditions, including various forms of congenital heart disease. Numerous reports outline the association of Ebstein’s anomaly with WPW syndrome, with up to 5% of patients suffering from both conditions in some series of cases. In adults, an association was observed between left accessory pathways and mitral valve prolapse. Left accessory pathways appear to be the most common, however, since mitral valve prolapse is also common in the patient population. Their association may indeed represent the coexistence of two relatively common conditions.

What are atrioventricular re-entry tachycardias?

The most common causes of re-entry SVT include nodal reentrant tachycardia (AVNRT), followed by atrioventricular reentrant tachycardia (AVRT), which depends on the presence of an accessory atrioventricular pathway (accessory pathways, AP), typical of Wolff-Parkinson-White syndrome (WPW). The mechanism of SVT also appears to be influenced by age and gender: AVRT is more common in the pediatric population, while the age of onset of symptoms in patients with AVNRT is almost a decade later than those with AVRT. The incidence and prevalence of SVT increases with advancing age; for all age groups, women are twice as likely to develop SVT than men. AVRT from WPW syndrome tends to be more frequent in males than in females, although the difference is reduced with increasing age, due to the progressive loss of pre-excitation due to the progressive fibrotic degeneration of many accessory pathways. In contrast, AVNRT (as well as atrial tachycardia, AT) is more frequent in females than males.

In WPW syndrome, ventricular atrium re-entry tachycardia is a macro-reentrant tachycardia that recognizes two anatomically defined conduction pathways: The Hissian node system and the accessory pathway itself. It is sufficient that between these two ways there is a difference in the refractory period or in the conduction speed for a return circuit to be created. Ventricular atrium re-entry tachycardias are commonly divided into orthodromic and antidromic depending on whether the anteroconduction occurs through the Hissian node system or through the accessory pathway. 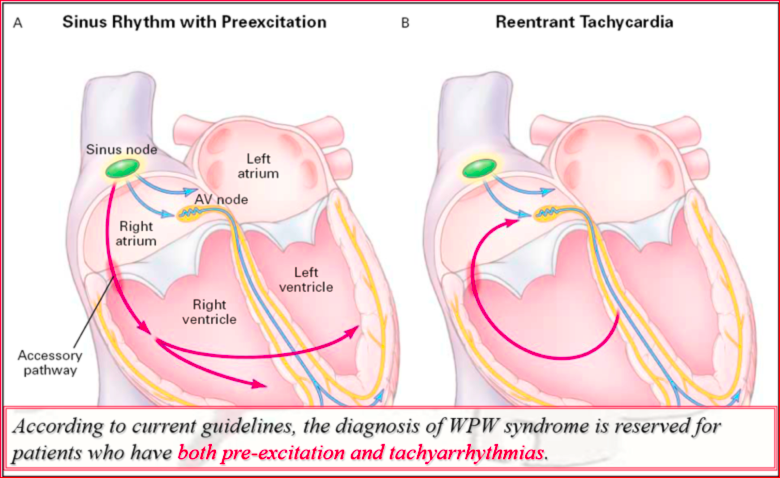 What are the accessory pathways in WPW syndrome?

The accessory pathways are abnormal muscle bundles through which the electrical impulse can by-pass the physiological system by hissian node conduction.

Pre-excitation exists when, in relation to atrial events, all or part of the ventricular muscle is activated by the atrial impulse sooner than would be expected if the impulse reached the ventricles only through the normal atrioventricular conduction system (A-V).

The Kent accessory routes: those that connect the atrial and ventricular tissues (atrioventricular pathways) 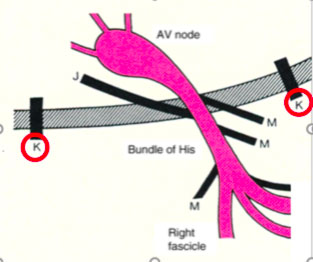 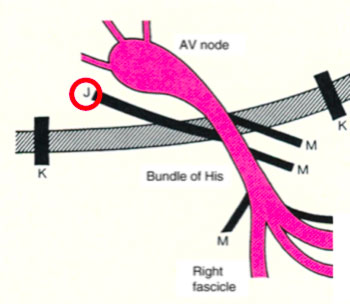 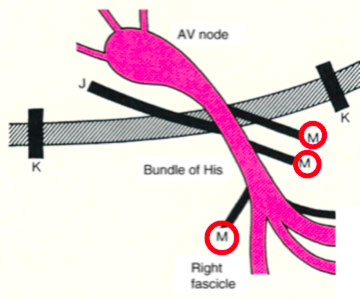 When equipped with antegrade conduction, the accessory pathways manifest themselves on the surface ECG with particular signs: 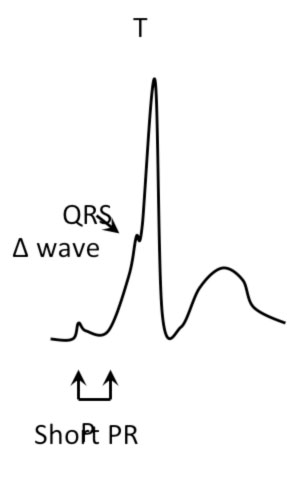 Sometimes ventricular pre-excitation can be occult or unmanifest.

The occult accessory pathways are defined as having only the retroconduction property.

On the contrary, the non-manifest accessory pathways are characterized by electrophysiological properties of anteroconduction superimposable or inferior to those of the normal Hissian conduction system, such that in basal conditions they are not visible. 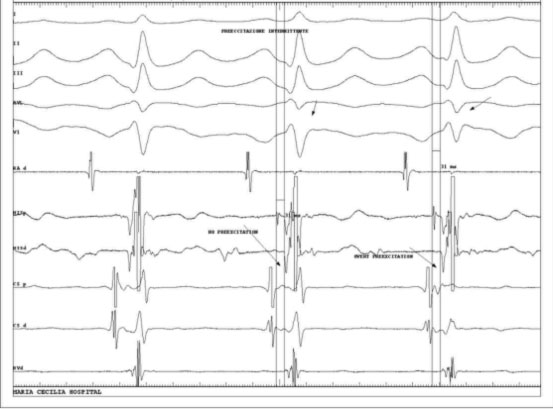 Another case is that of intermittent ventricular pre-excitation, in which ventricular excitation is not always present due to the antero-conduction properties of the same.

How are accessory routes located in WPW?

The accessory pathways can be located anywhere at the level of the tricuspid or mitral annulus, thus giving a particular electrocardiographic pattern from which it is possible to make presumed localization diagnosis. Furthermore, some patients may have more than one ancillary route. 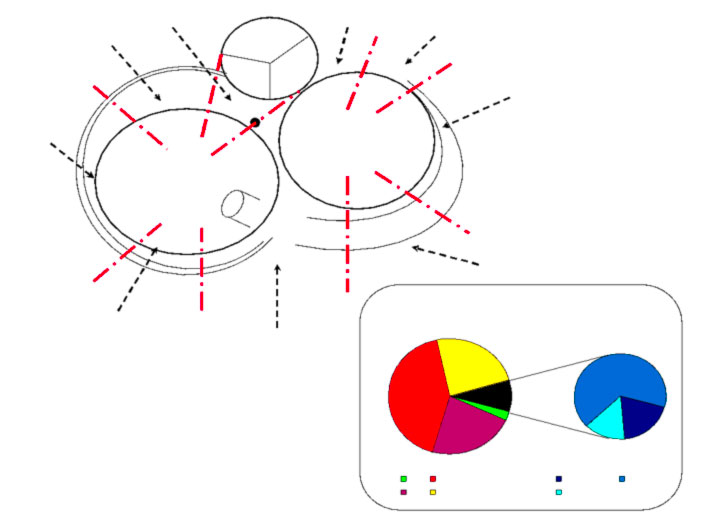 The QRS transition on the horizontal axis in the anterior precordium (V1-V4) differentiates AP on the left, septal from the right side, while the vertical axis of the delta wave determines its front or rear position along the annulus. The early QRS transition (at or before V1) indicates an AP on the left side because the initial ventricular forces are directed anteriorly towards the right ventricle. Delta negative waves in the lateral branches (I, aVL) or lower identify respectively an AP of the left free wall or an AP of the left rear wall. The horizontal transition to V2, which dominates the interventricular septum, indicates a right postero-middle-septal AP. The late transition (equal to or greater than V3) indicates a right side AP. The anteroseptal APs show a left bundle branch block (LBBB) model with transition before V4, sum of the polarities of the delta wave in the lower branches (II, III, aVF) ≥ +2 and a front QRS axis from +30 to +120 degrees.

The polarities of the P wave during orthodromic AVRT differentiate via accessory of the left, septal and right side. An axis of the P wave to the right (positive in aVR, negative in aVL) indicates atrial activation resulting from an AP on the left side, while an axis to the left (positive in aVL, negative in aVR) identifies the atrial activation from an AP on the right side. The middle postero-septal APs generate a midline, upper axis (equally positive in aVL and aVR), while the antero-septal APs produce positive P waves below.

Schemes that facilitate the anatomical localization of the accessory pathways are shown below: 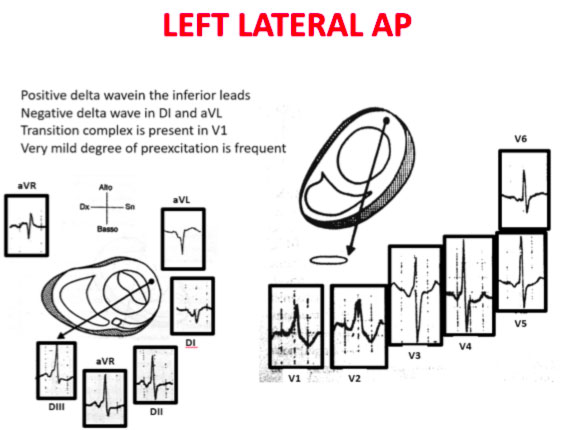 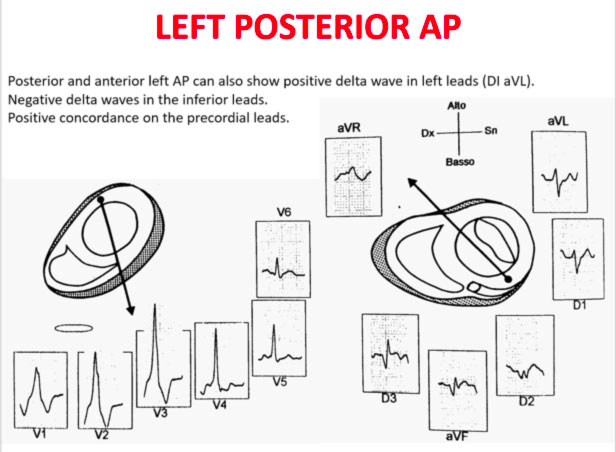 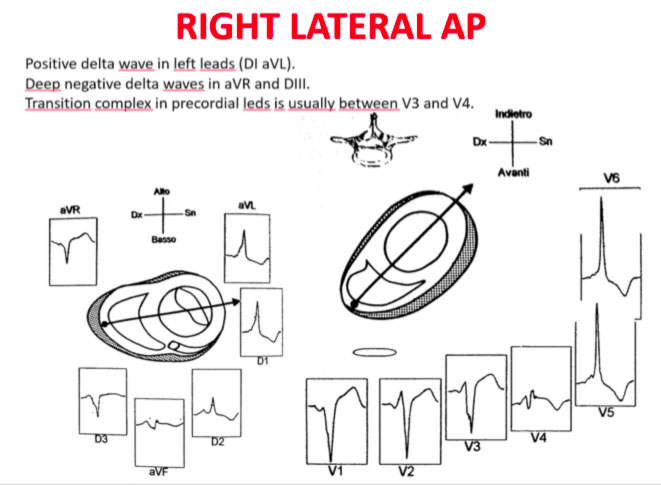 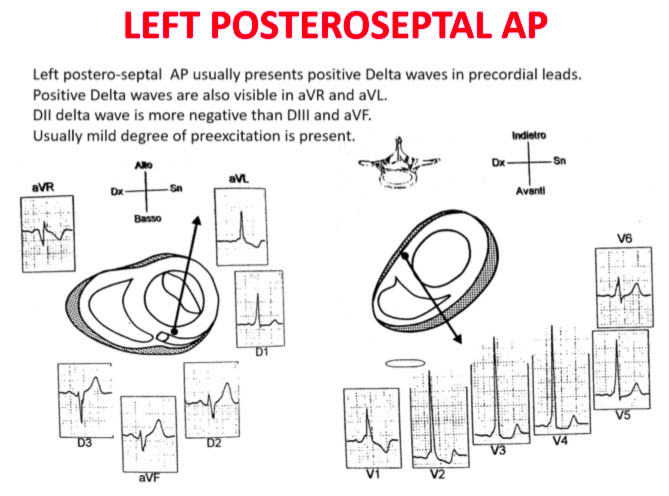 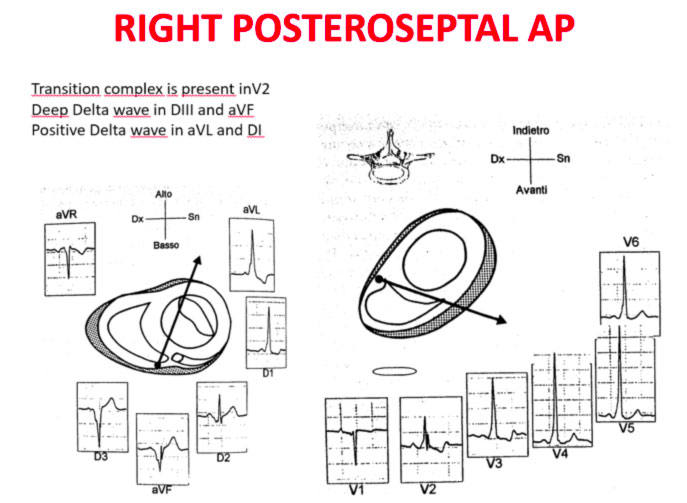 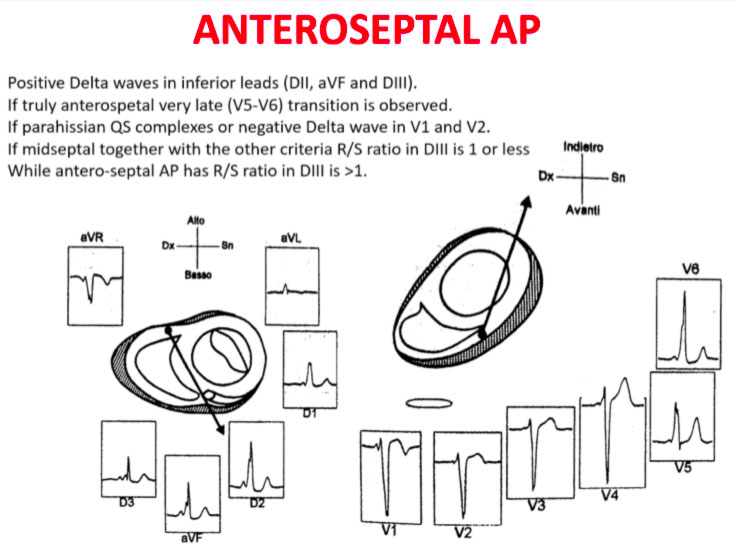 What are the goals in the treatment of WPW syndrome?

Pre-excitation therapy has four different objectives: 1. To cure symptoms; 2. Prevent the risk of sudden death; 3. Prevent or cure, in case of chronic tachycardia, the deterioration of ventricular function; 4. Allow subjects with pre-excitement to carry out all activities that are otherwise prohibited by law when there is pre-excitement on the ECG, for example in competitive sports or jobs in professions at risk.

In other cases, therapy is not indicated. In particular, in asymptomatic subjects who present only with the WPW pattern in the absence of arrhythmic symptoms, once specific risk factors are excluded through non-invasive and possibly invasive tests, no treatment is necessary, as the risk of developing dangerous arrhythmias is very limited.

What is the role of the electrophysiological study and of the transcatheter ablation in patients with WPW?

The episodes of recurrent SVT can start from early childhood, but their onset is more frequent during adolescence or adulthood; paroxysmal atrial fibrillation, on the other hand, appears almost exclusively in adults. It is not uncommon to see signs of pre-excitation ECG at birth, which disappear after some time, as the accessory pathway degenerates and becomes fibrotic, becoming unable to conduct; however the disappearance of the pre-excitation signs of the ECG does not necessarily mean that there is a complete elimination of conduction on the Kent route, since both the latent and hidden pre-excitation do not associate with the typical ECG scheme (delta wave, short interval PR, etc.) but both are capable of inducing arrhythmias (3).

What is the risk of sudden death in patients with WPW?

An extremely low percentage of patients with WPW suddenly die from ventricular fibrillation. The mechanism is almost certainly an atrial fibrillation with a high ventricular response, which degenerates into a ventricular fibrillation due to the high ventricular rate. This is a dramatic event that can also occur in asymptomatic subjects, with an incidence of 1:1000 subjects per year. It was observed that all patients with pre-excitation who were revived from cardiac arrest had a short antegrade refractory period (< 250 ms) of the accessory pathway. On the basis of these data, it has been proposed to consider patients “at risk” with this electrophysiological result (4). However, the positive predictive value of this parameter is very low, since about 20% of subjects subjected to an EP study have these characteristics and should therefore be considered at risk, while the actual incidence of sudden death is considerably lower.

If you want more information on transcatheter ablation of accessory pathways in WPW syndrome, click here