Ventricular tachycardias are accelerated heart rhythms that originate from the ventricles.

The heart contracts thanks to specialized cellular structures that generate electrical impulses and regulate their distribution in the heart itself.

In normal conditions, the electrical impulse originates in the atrial sinus node, propagates in the atria, and reaches the atrio-ventricular node, which is the only electrical communication path between the atria and ventricles; from here the impulse passes to the bundle of His and to the intraventricular conduction system.

WHAT ARE VENTRICULAR TACHYCARDIAS?

They are accelerated heart rhythms that originate from the ventricles.

WHAT ARE THEY AND HOW TO RECOGNIZE THEM?

They can be classified into:
• monomorphic ventricular tachycardia: on the echocardiogram, all the tachycardia beats are the same;

The patient’s ability to endure tachycardia without passing out or experiencing shortness of breath (hemodynamic tolerance) depends on two factors: heart rate during tachycardia and left ventricular function. If, in normal conditions, the heart contracts well, high frequencies can also be endured; on the other hand, if the heart is in poor functional condition, low heart rates are enough to cause disturbances.

WHY DOES THE PATIENT FEEL ILL?

It is usually caused by a re-entry circuit, which allows a single electrical impulse to continue to circulate indefinitely in the ventricular chambers. This circuit may be due to unknown (idiopathic) causes or to diseases known as myocardial infarction.

More rarely, ventricular tachycardias arise from ventricular foci that generate accelerated electrical impulses. Idiopathic forms can originate from the right ventricle or left ventricle, and it is believed possible that the mechanism is somehow related to the intraventricular conduction system. In these cases, we speak of “fascicular tachycardia”. 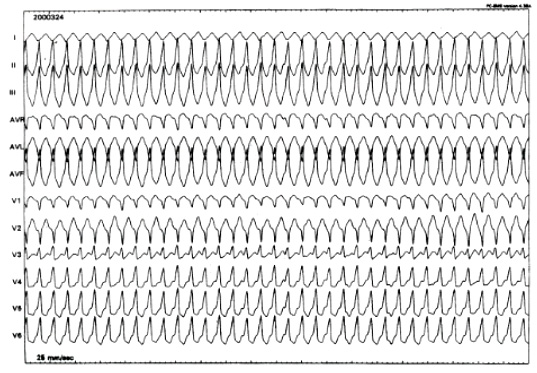 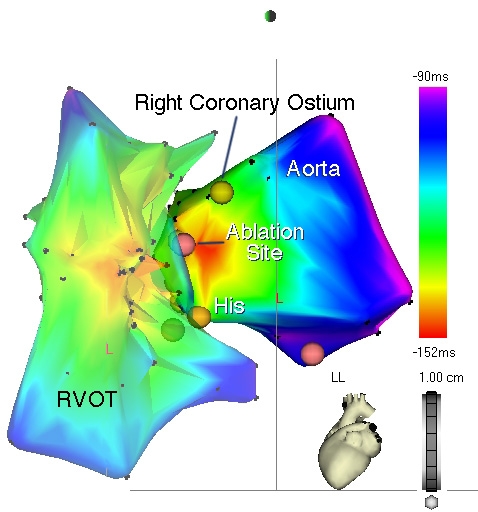 A frequent cause of ventricular tachycardia is also the presence of a previous heart attack. In this case, the circuit is determined by the infarct scar, and the tachycardia is almost invariably localized at the level of the left ventricle. There are sometimes areas in the right ventricle where normal muscle is replaced by fat or fibrous tissue. In these cases, we speak of “arrhythmogenic right ventricular dysplasia”, as these replacement areas behave like infarct scars and can cause tachycardias. A particular form of ventricular tachycardia is torsade de pointes. This tachycardia is associated with an echocardiogram anomaly called “long QT”; this anomaly may be congenital, but is most often caused by drugs, some of which are relatively frequently used.

HOW TO TREAT VENTRICULAR ARRHYTHMIAS?

Possible treatments include: antiarrhythmic drugs, transcatheter ablation, and/or, in the most at-risk cases, defibrillator implantation. 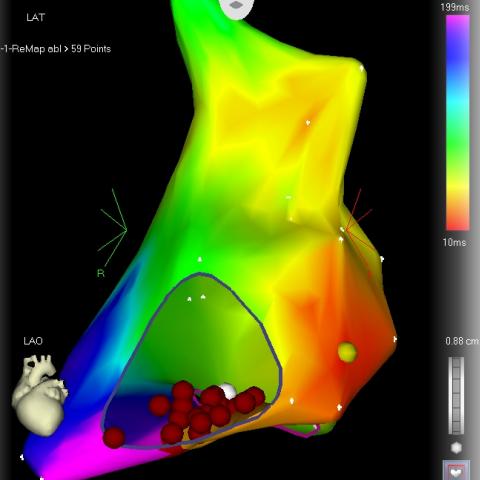