The Pacemaker is an electronic device capable of delivering electrical impulses to assist the heart beat in patients whose heart rate is excessively low. The pacemaker consists of a case (which contains the electronic circuits, which regulate the stimulation function, and the battery, generally lithium) and the leads.

Depending on the type of pacemaker, which is chosen based on the clinical condition, a single catheter (usually in the right ventricle, single chamber pacemaker) or two catheters (generally in the atrium and right ventricle, dual chamber pacemaker) can be implanted. In some cases, a third catheter can also be implanted, directed to the wall of the left ventricle through the coronary sinus (pacemaker-resynchronizer, or CRT-P). 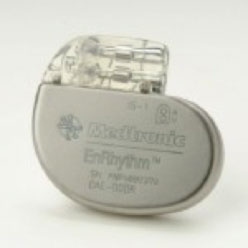 When is it necessary to implant a Pacemaker?

Under normal conditions, the electrical impulse, which allows the heart to contract and perform its function, originates in a group of cells located in the right atrium and is propagated to the whole heart through a conduction system whose main element is the ventricular atrium node.

The implantation of a definitive pacemaker is necessary in the presence of symptoms due to a low heart rate. The heartbeat is too slow when there is an alteration in the origin (for example, due to the disease of the sinus node) or in the conduction of the electrical impulse (for example, an atrioventricular block); in these cases the main disturbances are dizziness, weakness, shortness of breath, syncope (or loss of consciousness).

How is the Pacemaker implanted?

The implantation of a pacemaker is performed under local anesthesia. The first phase is the introduction of the leads, which are electrical wires that transmit impulses to the heart, through the cephalic vein and / or the subclavian vein (generally on the left). The approach to these vessels occurs with different techniques in the shoulder region under the clavicle.

The catheters are pushed to the heart under the guidance of X-rays and are positioned in the heart chambers (right atrium and / or right ventricle) in optimal positions to ensure the stimulation function (or pacing function) and the function of capturing the spontaneous electrical activity of the heart (or sensing function).

After checking the stability and effectiveness of the stimulation, the catheters are connected to the pacemaker. By means of a small incision, the pacemaker is inserted under the skin, creating a special pocket, and the small wound is closed with some stitches, partially absorbable. The procedure lasts on average 45-90 minutes. 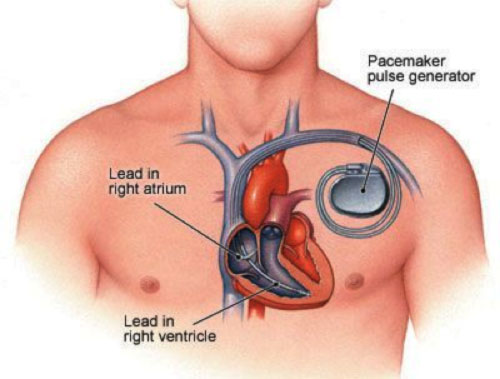 What are the risks of implanting a pacemaker?

The procedural risks are generally very low, and complications are very rare. Among the possible complications, the most common are the following:

In even rarer cases, as a result of pocket infections or endocarditis, pacemaker explantation may be required.

How are checks performed after pacemaker implants?

An outpatient evaluation of the surgical wound is performed about 7-10 days after the implant and, if non-absorbable suture thread is used, the stitches are removed.

Patients with pacemakers must subsequently undergo regular (generally every six months) checks of the device, according to the timing recommended by the Arrhythmologist Cardiologist.

The checks can be closer together in case of particular arrhythmias, problems related to leads, and in the period near the end of life of the device.

Checks of patients with pacemakers are generally carried out on an outpatient basis, and in some cases, depending on the specific pathology, remote telemetry control or remote monitoring of cardiac devices is also recommended (for example, in the case of pediatric patients, or in case of pacemaker resynchronizers, or in case of malfunction of the leads or of particular arrhythmias).

If you want to know more → Remote device monitoring

Patients undergoing a pacemaker implant usually return to normal daily activities in a very short time after the implant. In the first three months after the implant, it is generally recommended to avoid intense physical activity or carrying heavy loads. Thereafter, the patient can gradually return to their normal lifestyle, and resume the physical activity to which they were accustomed after completing the recovery period.

Driving the car can be resumed with some limitations, and in some cases the driving permit is issued for a shorter period than normally. The use of a seat belt in the car is not recommended for patients with pacemakers.

It is possible to practice physical and sport activity after pacemaker implantation?

After the first three months, in general, the patient can return to non-competitive physical activity. In general, caution should be exercised in the first months after implantation in sports, such as tennis, golf, or swimming, that involve the upper limbs in particular, avoiding excessive traction that may cause dislocations of the leads.

Particular caution should be exercised in sports that involve violent physical contact (e.g. football, rugby, wrestling), or at risk of falling (e.g. downhill skiing) or bumps at the implantation site (boxing, judo), as these could damage the device or leads.

Competitive physical activity is not prohibited for pacemaker wearers, although the specific sports activity should be reviewed by the cardiologist.

It is possible to pass through the security gates after pacemaker implantation?

Before entering a security gate, in particular at the airport, the patient must inform the surveillance staff that they are carrying a cardiac device and show the identification certificate. Then the patient will cross the passage at a normal pace, taking care to move away from the system if he feels dizzy or an acceleration of the heartbeat.

Airport security systems are magnetic detectors and will therefore issue an alarm signal when they detect the metal casing of the cardiac device. If the surveillance staff uses a handheld metal detector to monitor passengers, tell the attendant not to place or pass the instrument over the cardiac device.

For further information on the compatibility of the devices with the electromagnetic security gates, consult the instructions provided by the individual manufacturing companies.

If you want to know more> Information from the Manufacturers

What medical and orthodontic procedures can be performed after pacemaker implantation?

Before undergoing any medical procedure, always inform your doctor, dentist or technician about the presence of the pacemaker. Before performing the procedure, these professionals may need to contact the cardiologist, particularly if the procedure is new or unusual.

Some procedures may affect the function of the cardiac device, and therefore require precautionary measures to avoid or minimize any effects on the patient or on the device itself.

Can magnetic resonance imaging be performed after pacemaker implantation?

In general, magnetic resonance imaging (MRI) is still prohibited in all wearers of old generation cardiac devices (because of the risk that the magnetic fields generated may damage the components or inhibit the function).

The scientific guidelines and recommendations of the manufacturing companies do not contraindicate the examination in patients with new generation MRI-conditional devices (provided that the required safety parameters are respected: imaging protocols, monitoring of both device function and patient parameters during the examination).

What happens in the event of a battery drain or a pacemaker malfunction?

In the event that during the checks (carried out in the clinic or remotely) the depletion of the device battery is detected, the replacement is scheduled, which is carried out after a short hospitalization. In general, the replacement takes place through the incision of the skin, with the removal of the old device and the repositioning of a new device in the same pocket, after the reconnection of the leads, which instead are not generally replaced.

If, however, a malfunction or breakage of a lead is detected, an overhaul of the implant may be necessary, with the replacement and repositioning of the leads. This review is performed after hospitalization, and the specific procedures necessary will be explained directly by the doctors on a case-by-case basis.