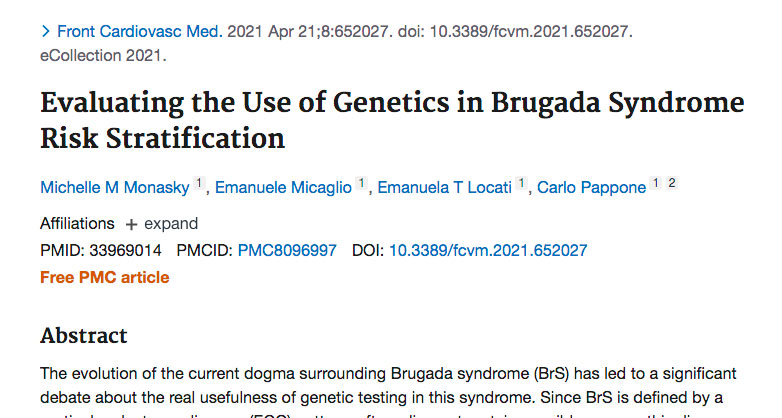 The evolution of the current dogma surrounding Brugada syndrome (BrS) has led to a significant debate about the real usefulness of genetic testing in this syndrome. Since BrS is defined by a particular electrocardiogram (ECG) pattern, after ruling out certain possible causes, this disease has come to be defined more for what it is not than for what it is.
Extensive research is required to understand the effects of specific individual variants, including modifiers, rather than necessarily grouping together, for example, “all SCN5A variants” when trying to determine genotype-phenotype relationships, because not all variants within a particular gene act similarly.
Genetic testing, including whole exome or whole genome testing, and family segregation analysis should always be performed when possible, as this is necessary to advance our understanding of the genetics of this condition. All considered, BrS should no longer be considered a pure autosomal dominant disorder, but an oligogenic condition.
Less common patterns of inheritance, such as recessive, X-linked, or mitochondrial may exist. Genetic testing, in our opinion, should not be used for diagnostic purposes. However, variants in SCN5A can have a prognostic value. Patients should be diagnosed and treated per the current guidelines, after an arrhythmologic examination, based on the presence of the specific BrS ECG pattern.
The genotype characterization should come in a second stage, particularly in order to guide the familial diagnostic work-up. In families in which an SCN5A pathogenic variant is found, genetic testing could possibly contribute to the prognostic risk stratification.

This website uses cookies to improve your experience while you navigate through the website. Out of these, the cookies that are categorized as necessary are stored on your browser as they are essential for the working of basic functionalities of the website. We also use third-party cookies that help us analyze and understand how you use this website. These cookies will be stored in your browser only with your consent. You also have the option to opt-out of these cookies. But opting out of some of these cookies may affect your browsing experience.
Necessary Sempre abilitato
Necessary cookies are absolutely essential for the website to function properly. These cookies ensure basic functionalities and security features of the website, anonymously.
Functional
Functional cookies help to perform certain functionalities like sharing the content of the website on social media platforms, collect feedbacks, and other third-party features.
Performance
Performance cookies are used to understand and analyze the key performance indexes of the website which helps in delivering a better user experience for the visitors.
Analytics
Analytical cookies are used to understand how visitors interact with the website. These cookies help provide information on metrics the number of visitors, bounce rate, traffic source, etc.
Advertisement
Advertisement cookies are used to provide visitors with relevant ads and marketing campaigns. These cookies track visitors across websites and collect information to provide customized ads.
Others
Other uncategorized cookies are those that are being analyzed and have not been classified into a category as yet.
ACCETTA E SALVA
Richiedi AppuntamentoRichiedi Informazioni+ 39 02 52774260